Well its been a super long time since I've done a post, so it is definitely time for an update. I've been focusing all my recent energies on putting up new climbs around the FOCO area. This process has involved a lot of hiking only to find crap rock in the Poudre Canyon and west of Rustic. I have had a lot of success in the widow makers, which is a talus field in the middle of the Narrows of the PC,  only 30 minutes from town with plenty of high quality blocks. This place was picked over years ago by a few FOCO climbers including, Michael Engelstad, Colin Horvat, Paul Nadler and more. This crew put up most of the best lines, but plenty still lurk. Me and Brett Hoffman added a few boulders by digging rocks out from underneath starts and trying some of the weirder highball climbs. Videos of these climbs can be seen at (https://www.youtube.com/watch?v=Ex-J_qUtMy0)


I also went out to Carter Lake for the first time since last year and tried this super hard mini project on the backside of the Kahuna boulder. The climb is incredibly crimpy and involves using super high feet for the crux, so I found it fit me pretty well. Someone has gotta go get the second ascent!! I'm pretty confident the grade is V11 or maybe just hard V10. The video can be seen at https://www.youtube.com/watch?v=lf3Yuy4jen4


Email me at Samjohnroth@gmail.com for info about the WIDs or other climbs, or if you just wanna go climb.

Posted by Unknown at 1:10 PM No comments:

Had the pleasure of spending a week in Joes Valley over spring break with the legendary Eric palmer and Cooper. Got to climb on some epic boulders and a lot of classics. Overall, it was a pretty productive week; however only two of the days I climbed I actually topped some hard stuff.

We Call Him Michael (V10)- this was the first boulder I tried and I took er down 3rd go. Climb revolves around locking down two good crimps at the start, and finishing a V8. Actually felt pretty soft, I think this climb will be downgraded in the future.

Fingerhut (V10)- I really really wanted to flash this one, cause I knew it fit me super well. I got a little excited and didn't hit the first hold right. Then rapid fired the climb until I sent, took about five tries. This boulder is very aesthetic and super fun to climb, the only part that sucks is down-climbing the topout.

Big Joe Left (V11)- I had tried this boulder a year ago on my last spring and got shut down pretty hard. This trip I was able to complete all the moves in one session. After falling on the last move 3 times, I took a rest day. The following morning I came back and took it down second go. This climb was really fun for me, it required lots of tension on good incut crimps then two powerful moves on pinches to get to the finishing jug.

Mass Hysteria (V11)- This climb is an obvious sit start to an established V9 called Hooters. The climb is on a beautiful black and orange vertical section of wall and every hold is a small incut crimp.   This climb fit me extremely well because it didn't require any core strength, just heinous crimp abilities. It took me about 15 minutes and 10 goes to send this one.

Freak (V10)- Palmer and Cooper wanted to night sesh Planet of the Apes and Chips so I tagged along. After Palmer took down planet, we moved on to the resident evil boulder. I went straight to Freak, which is on the backside of the boulder; the crux of this climb is the first 3 moves. You have to make a big reach to very small incut crimp then keep some serious body tension to gain the next few holds. This climb took a lot of effort, and it felt like one of the harder V10's at joes. I thought it was almost a grade harder than fingerhut.

Two-Finger Variation (V9)- This rig is right next to Freak and has a very similar style (tension). The last move is a really precise deadpoint to a jug pocket, and I feel at this move a few times. After 15 minutes of effort I finally stuck the finish jug and topped the boulder.


Stay tuned for pictures and some videos from the trip!
Posted by Unknown at 11:26 AM No comments:

A Day at Lory

After almost two weeks of snow, the sun finally decided to show its face for long enough to dry out the boulders. So I took a trip to lory state park with Jake Atkinson, Peter Hurtgen, Laren Cypers and Brett Hoffman. The first boulder we did was called Last Resort (V5) put up by local strongman Will Lemaire. I then when on to try Triton (V11/12) that has a really sharp/crimpy start then reachy moves on slopers for the finish. I managed to do the climb in two sections on my first day on it, so I was really psyched about that. I think I will be able to complete it soon, however I have a hundred other projects I need to do as well. Next I tried the Brick Pinch (V11), this climb involves a really powerful start section followed by a crux move to a tiny two finger tooth. Once you stick the tooth you have to one more hard move to a terrible edge. I was really happy to make a one day ascent of this climb, especially since it seen very few repeats since Sean Drolet put it up. We finished the day on an epic V8 highball called Childbirth, I got pretty close but the top was a little wet and the down climb was totally iced over. Check out my youtube channel athttps://www.youtube.com/channel/UC6tOWVJewtOtXmLlV9IBHKQ, I will be uploading my send of Brick Pinch very soon!

I decided a long time ago that if I ever climbed V10 I would start a blog, track my ascents and try and get a sponsorship from a brand I respect. My V10 dream finally happened about a month ago, when something clicked in my head and I started actually putting down projects. I'm sure every climber has been where I was; capable of doing all the moves in a project but never be able to top it out. For years I could do the moves on but never link them together, it was very frustrating. After putting down Divergence Sit a month ago, the stress of trying to complete something hard was lifted. When I was climbing, I used to have thoughts in my head like "this foot feels bad" "my fingers hurt" "that looks far away". Once I turned that off my climbing started to improve dramatically. I took a trip to Hueco and sent Power of Silence V10,  Predator V10, Burden of the Beast V10, Swiss Crisp Mix V10,  Free Willy V10 and Diaphanous Sea V11. I came from Hueco and started climbing in the front range and my success continued. On my second day back I took down Eliminator sds V11 and Moon Arete (V10) and got very close on Sitting Moon V12 in horsetooth. All of this happened in about 5 weeks so needless to say I'm pretty psyched. Here's some pictures and a link to a short hueco edit I made. 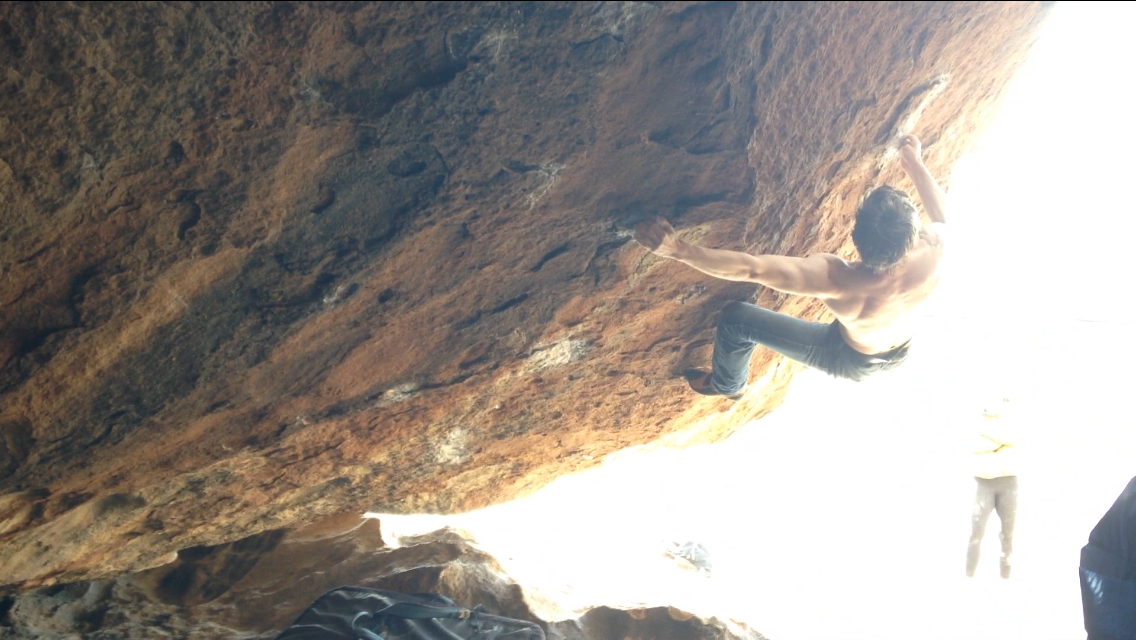 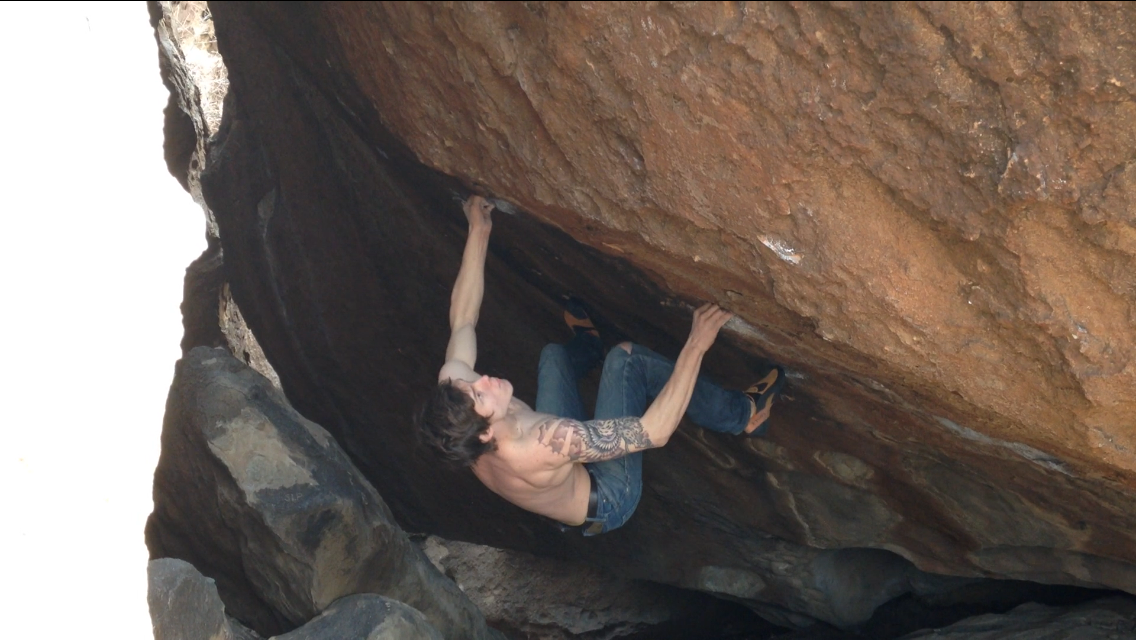 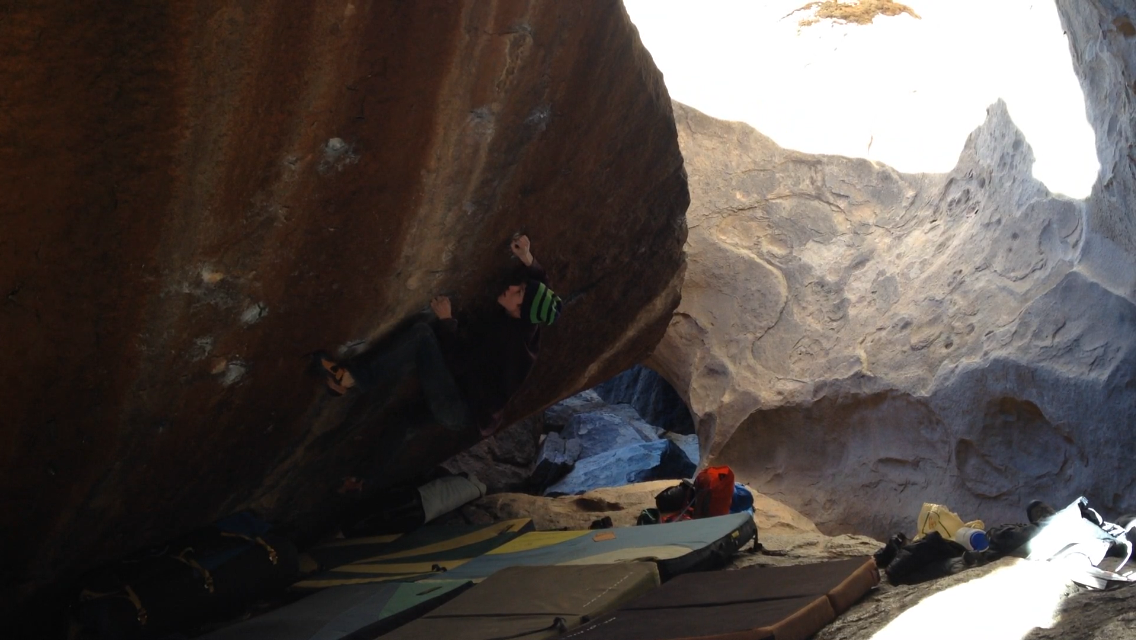 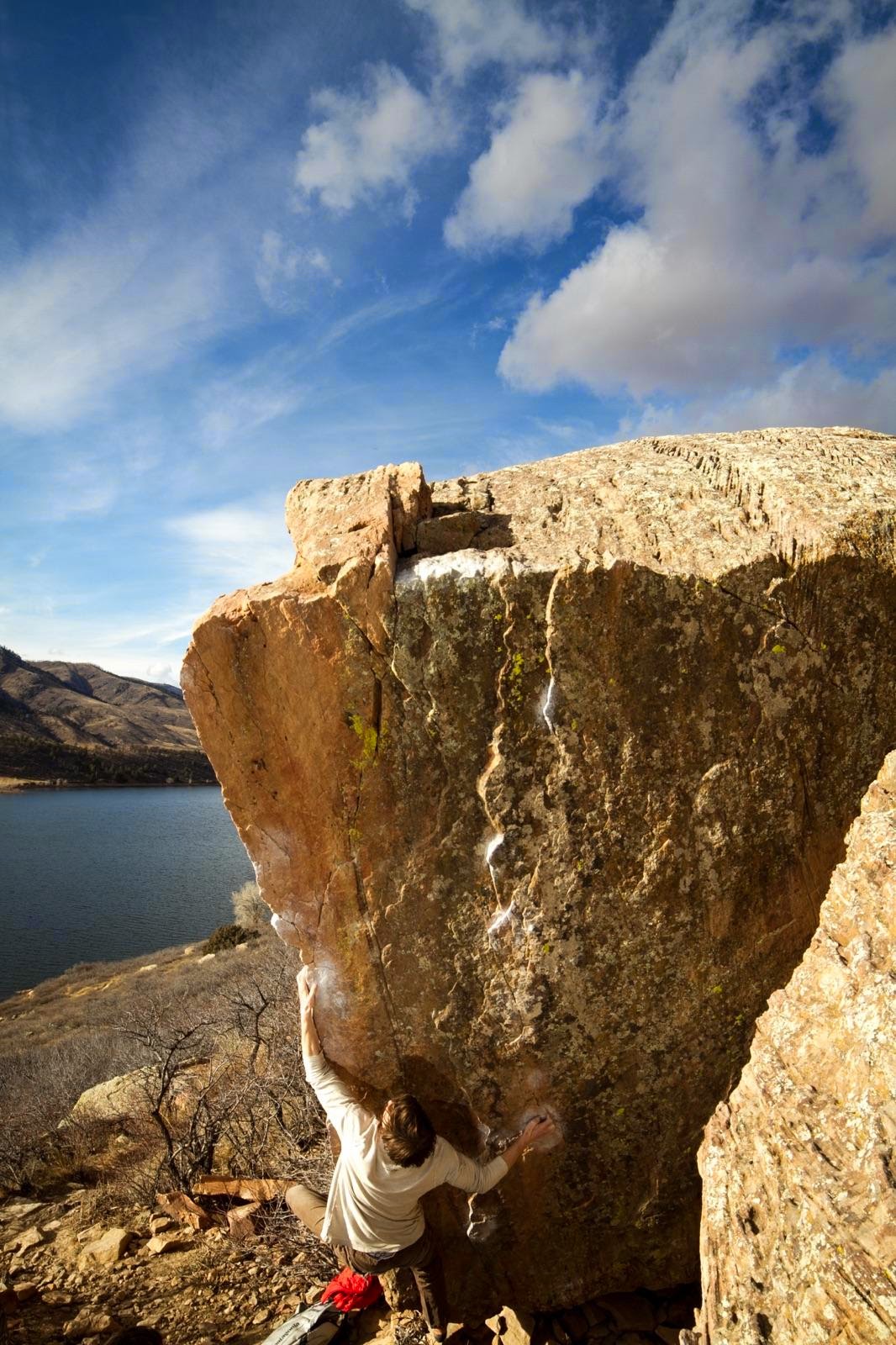 A Day in the Poudre

A 60 degree day in february....gotta take advantage of that. Took a quick trip up the Poudre with some friends, including Eric Palmer (the one and only) Laren and Mike (badass dude putting up first ascents in a new area of the Poudre). Warmed up at the hatcheries, which is my favorite place to warm up before a day bouldering in the 420's or Gandalf. After warming up, we went to the king fin area, I tried critical mass (V12) for the first time and was pretty inspired. The line is awesome and every move is in your face. I was able to do all the moves but one. However linking even two moves together was difficult. I then when on to do King-Fin (V4) which was amazing. Next we went to the Black Problem (V9) and I tried that for the first time. It didn't take me long to figure out all the moves and I sent after about 40 minutes; I did however fall on the topout twice because it's pretty tough. After the black problem I climbed Angry Black Man (V8) which is right next to it. Its only a one move wonder but it was still pretty fun. We finished the day on Merlin (V7) a tall and classic climb that I've never done before. I completed it pretty quickly, the crux was making a lurchy move between good holds with bad smearing feet. It was fun to visit four different areas and it's always great to climb new boulders. 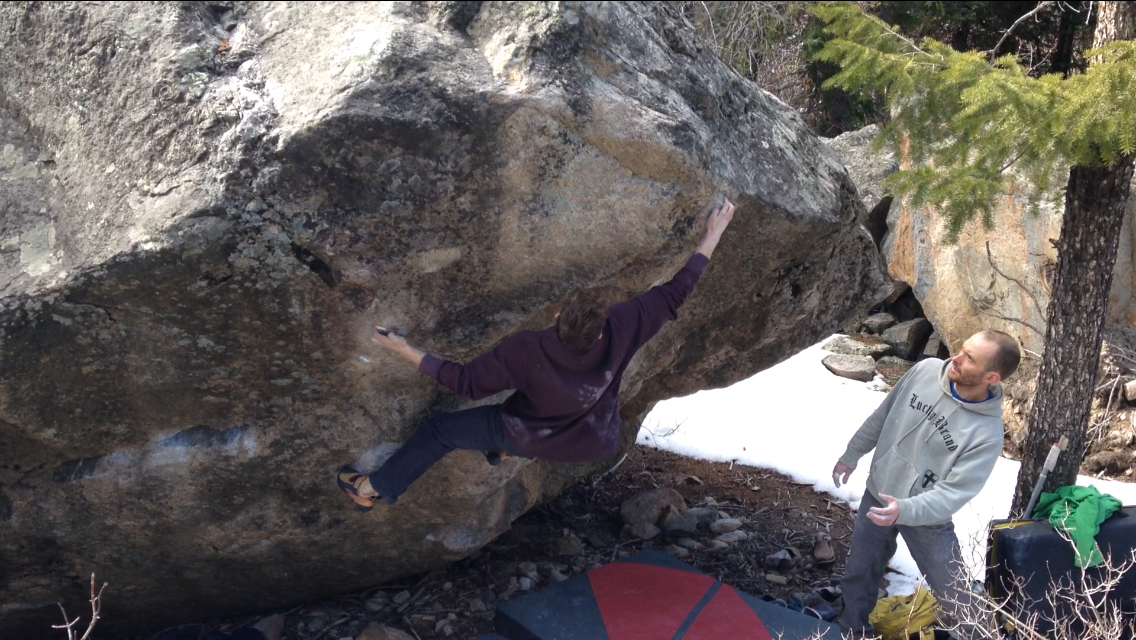 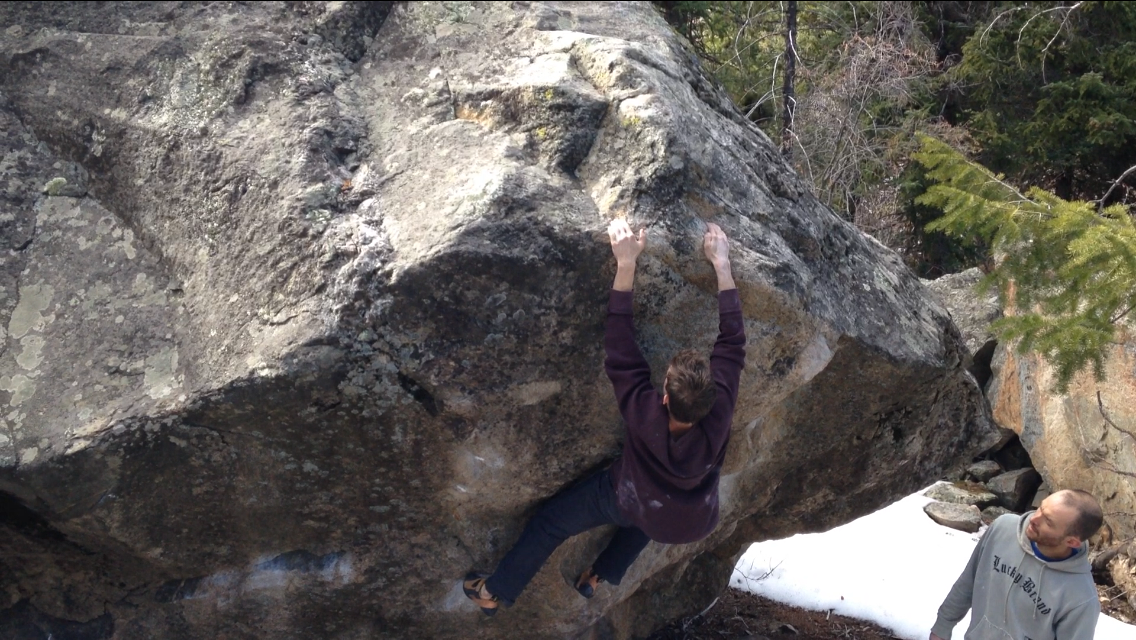